Back in 2014, while at the Flatiron School bootcamp, I configured my BASH prompt.

The configuration code has lived in directly in my ~/.bashrc on Ubuntu and ~/.bash_profile on macOS for years, traveling with me from install to install.

Seven years ago, I remember working out the colors was non-intuitive and particularly tricky; and the only really fancy bit is that it tells me if the git repository I’m in has uncommitted changes or not.

I liked the ✚ character right at my prompt because it made me feel like coding could be akin to helping people get things done.

This hunk of code still works as well as ever, but it’s 2021 and I’m up for trying something new.

How about Starship, a “minimal, blazing-fast, and infinitely customizable prompt for any shell!” that’s written in Rust!

At the top of the installation page, Starship tells me I need to install a Nerd Font of my choice. I assume this is to ensure we have all the nice icons that Starship uses.

While I had been using DejaVu Sans Mono for coding, I wanted to try JetBrains Mono, so I downloaded that Nerd Font. I extracted the downloaded file, then launched the Font Management GUI program on Ubuntu and added the font through its interface, selecting all of the files in the downloaded archive (not sure if I was supposed to be more selective).

With my desired Nerd Font installed, the Starship guide tells me to run:

This produced this message, asking me to confirm that I wanted to install Starship to /usr/local/bin:

That sounds fine, so I said y. It prompted me for my sudo password, then installed without issue.

Since I use Bash, I then added the given initializing line of code to very end of my ~/.bashrc:

Then I launched a new window of my terminal (called Konsole) and, boom, I saw the default Starship prompt!

(Note that the above screenshot still uses DejaVu Sans Mono for the characters. I only later switched my Terminal’s font to JetBrains Mono Nerd Font in Konsole’s settings.)

The docs also helpfully notes that:

To update the Starship itself, rerun the above script. It will replace the current version without touching Starship’s configuration.

I appreciate that their FAQ answers this question, and that the answer is pretty simple.

You just remove the Starship-related line from your Bash config file, then run:

One of the reasons I wanted to try Starship is that it seems to give you a lot of great features right out of the box, by default. And the out-of-the-box prompt is pretty robust!

But you can config some things in ~/.config/starship.toml, a file I created.

Following the example config, I tried to preserve my plus sign character prompt, but it didn’t display properly (only the left half I think). So I decided to stick with the default character. I did make two small changes:

I was also sure to change the font of my Terminal, Konsole, from DejaVu Sans Mono to JetBrains Mono Nerd Font. 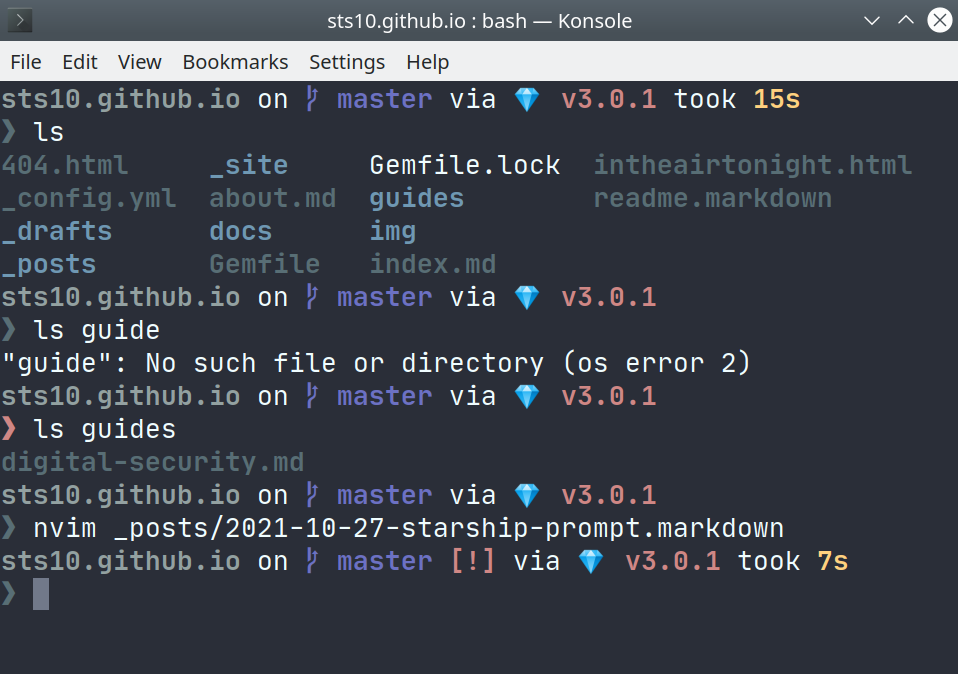 If you don’t want to display the version of, say, Python, you’d do:

Helpful if Starship isn’t detecting the right version of Python.

If you want to display an A emoji when you’re connected to an AWS box:

My two main questions before installing Starship were:

What would happen to all my prompt work in my bashrc file?

Since the init BASH line is at the way end of my bashrc, I think Starship quietly supersedes all that Bash color code at the top of this post. This is pretty much ideal, since I can now either keep it as a fall back for if/wehn Starship is not installed, or remove it, cleaning up my bashrc file that’s already very long.

What about my terminal colors?

It seems like Starship generally kept the hex color codes I set in my terminal’s settings, which is good, though it definitely uses some colors I don’t recognize. These are likely colors I set in my terminal config but haven’t seen in years. (It would be cool if Starship also somehow took care of these colors for you, but it’s also fine that they don’t.)

There’s definitely more information in the prompt than I had before, which is nice. Think I need to spend some time with it to get used to it and what each of the symbols mean.