Many websites and infographics I have consulted claim that on Twitter, shared images, images that users attach to their tweets as opposed to profile and banner images, are always displayed in a 2 to 1 ratio, whether in-stream or when “expanded.”

Here’s one such infographic from Sprout that claims to be always up-to-date:

And one from a Constant Contact, which makes a separate specification for in-stream previews, which it says are also displayed 2 to 1:

In my somewhat-hasty search this morning I didn’t find any pages live on twitter.com or support.twitter.com that claim the 2 to 1 ratio, though. The API docs have a page dedicated to “Summary Card with Large Image”, but I think that’s Twitter’s relatively new feature of pulling in preview photos when users include a link in their tweet copy.

Here’s a tweet I sent last night with an image generated by a new tool I’m working on.

The Coast Guard has suspended its search for two missing teens off the Atlantic coast pic.twitter.com/aePkfIa7TT

Here, in the name of transparency and redundancy, is the actual image itself, which I contend measures almost exactly 600px by 300px. 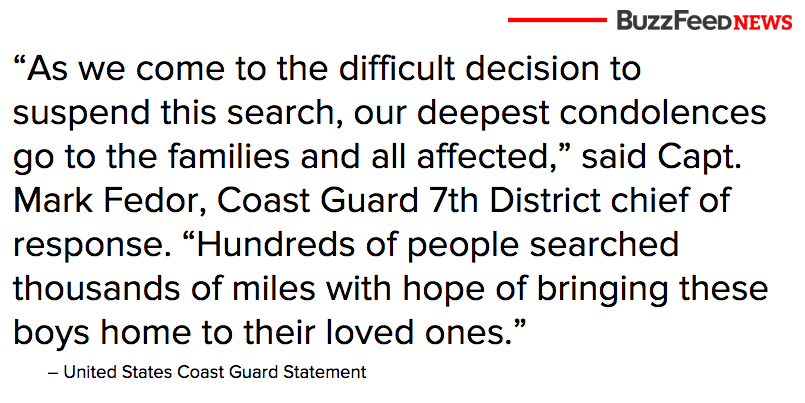 Am I going crazy? Is this other ratio documented anywhere? Clearly how images are displayed in-stream in the official iOS app should be relevant information to anyone seeking an infographic of social media image dimensions, and I would think something that Twitter would want readily available to social media editors and marketers. As a developer I’m now forced to choose whether to optimize for mobile or desktop, or to generate images that split the difference, displaying sub-optimally in both settings. Am I missing something?!

I did a little more ~research~ yesterday and looked at how some other media organizations sized their screenshots:

I’ve concluded that a ratio around ~1.74 to 1 is solid for mobile, but that desktop likes 2 to 1. I’m thinking about compromising more on the mobile side and doing 1.8 to 1 (so right about with the Times).